Sixty Years Under the Shadow of Castle Bravo 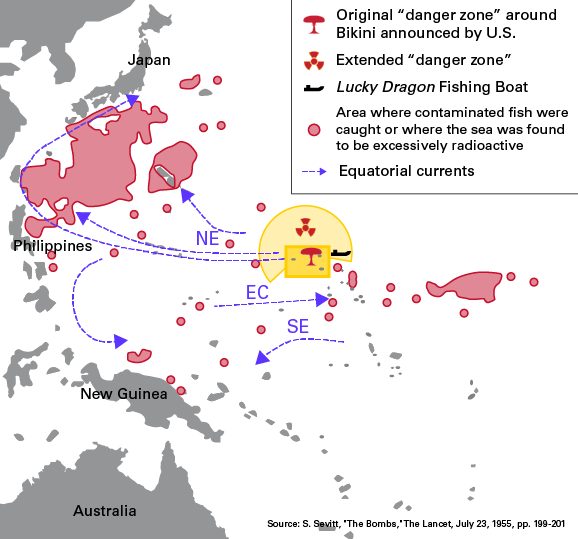 On March 1, 1954, the U.S. conducted its largest nuclear test. The Castle Bravo nuclear test on Bikini Atoll unexpectedly unleashed 15 megatons of explosive force on the tiny island. At 1,000 times the strength of the bomb dropped on Hiroshima, Castle Bravo’s devastating effects where widely felt across the western Pacific.

Sixty years later, the Marshall Islands still bears the marks of the Operation Castle tests – of which Castle Bravo was the first and largest. Bravo more than doubled its predicted yield of about 6 megatons. With inadequate safeties in place, radiation from the explosion  injured a number of the crew and killed the radio operator on the Lucky Dragon #5 – a Japanese fishing boat that found itself too far inside the so called “danger zone.” Additionally, U.S. servicemen involved in the test where exposed to dangerous levels of radiation and forced to retreat to bunkers to wait for rescue.

This incident is widely considered to be the United States’ worst radiological disaster.

Speaking on the 60th anniversary of the test, Acting Under Secretary for Arms Control and International Security Rose Gottemoeller reminded us of the nuclear war the U.S. waged on itself and its allies during its arms race with the Soviet Union:

In 1962, the Cuban Missile Crisis opened the eyes of the world to the terror of nuclear war, but there were people across the globe who were already all too familiar with nuclear dangers. People in Japan and the Marshall Islands, those downwind from the nuclear test site in Nevada, the mothers who found radioactive material in their children’s milk: all understood in first person the health effects of nuclear explosions in the atmosphere. In 1963, about a decade after Castle Bravo, President John F. Kennedy called for a complete ban on nuclear explosive testing.

Noting that 70 years without the use of a nuclear weapon in anger by any nation is a great achievement, Gottemoeller claimed it is also a testament to the human toll of these weapons. Gottemoeller would like to see that record of non-use extend forever. In order to ensure non-use, Gottemoeller stated that “Ratification of the CTBT is central to leading other nuclear weapons states toward a world of diminished reliance on nuclear weapons, reduced nuclear competition, and eventual nuclear disarmament.”

This is not just a security issue; this is an issue of humanity, of health, of morality. We are the stewards of this Earth and we owe it to those who have fallen – to those who suffer still – to work together, one step at a time, until nuclear explosive testing is banned worldwide, getting us one step closer to our goal of the peace and security of a world without nuclear weapons.

Often lauded as awe-inspiring, the Castle Bravo test stands as an icon of those fears and a stark reminder of our inability to control these weapons. Sixty years later, the awe has faded and we are left with the human cost. As Gottemoeler said on March 1, 2014, we owe it to those who paid the price to find a better way forward to ensure we create a world where nuclear weapons can never be used again.