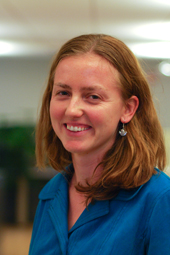 Faith-based organizations are at the forefront of advocating for historical policy changes to national and foreign policy to create a more just and safer world. Ploughshares Fund sat down with Kate Gould, lead lobbyist on Middle East Policy at the Friend’s Committee on National Legislation, to learn more about their lobbying efforts, including on the current Iran nuclear negotiations.

Ploughshares Fund: Faith-based organizations are generally associated more with helping people at the community level. How did the idea for Friends Committee on National Legislation (FCNL) come about and why create a national, faith-based lobbying organization?

Kate Gould: FCNL is part of a long tradition of Quakers speaking truth to power to change unjust policies. Since Quakers came to the United States, they have been at the forefront of advocating for the abolition of slavery, women's suffrage and other historic policy changes from a faith perspective. Today, FCNL fields the largest team of registered peace lobbyists in Washington, D.C. and advocates for peace and social justice issues from a faith-based perspective.

FCNL was founded by a group of Quakers meeting at Quaker Hill in Richmond, Indiana in 1943.They saw the need to dedicate time to lobbying to advance the policies on a national level that are so crucial for helping people at the community level.

PF: FCNL is very focused on nuclear weapons, defense spending and foreign policy. Why did FCNL choose to work on these issues? How do they relate to being a faith-based organization?

KG: Creating the world we seek requires changing the way the United States engages with the world and transforming our militaristic outlook to a viewpoint rooted in inclusive, diplomatic solutions. We advocate for the idea of "shared security," understanding that security in this country depends on advancing global security.

Our legislative priorities for each session of Congress are determined by our governing board, made up of nearly 200 Quakers representing Quaker meetings and churches across the country. Hundreds of other Quakers actively contribute to this process. As a result of their concerns on this issue, FCNL has helped lead faith-based advocacy on nuclear disarmament and reducing military spending for decades. In more recent years, FCNL has also become one of the leading grassroots advocacy organizations with a sustained campaign to support diplomatic solutions in the Middle East, particularly negotiations to resolve the dispute over Iran's nuclear program.

Faith communities are particularly well-suited to help change Beltway conversations often steeped in shallow and partisan bickering to one rooted in a moral framework for peace and social justice issues.

On a very practical level, most congressional districts contain deeply-rooted faith communities that represent diverse and well-organized constituencies. No member of Congress can ignore that people power.

A challenge that we face is that people sometimes think our expertise is only in matters that directly relate to faith, or that policy and faith are mutually exclusive.  Some people I've talked to have been surprised that our staff has so much policy expertise on the budget process, international relations, climate change and other issues.

I've even had people ask me if the goal of my lobby visits is to convert members of Congress to Quakerism!

PF: Turning to Iran and the P5+1 negotiations, why did FCNL take on this particular issue?

KG: Supporting the negotiations over Iran's nuclear program has been a major priority for FCNL's work because it has such profound implications for getting us one step closer to a world free of nuclear weapons and war.

We want to see the current negotiations succeed in resolving the dispute over Iran's nuclear program and also to serve as a springboard to help resolve US-Iran tensions that have fueled violence in the region, particularly in Syria.

Not to mention, a nuclear deal with Iran could be a gateway for comprehensive negotiations to help de-escalate the violence in Syria and Iraq.  The successful deal that eliminated Syria's chemical weapons arsenal demonstrates that diplomacy is essential to making the world a safer place.

PF: As pressure was mounting for a military strike on Iran’s nuclear program, what did you and FCNL’s grassroots network do to build support in Congress for giving space to negotiators to proceed with diplomacy instead and get us to the place we're in now with diplomats working toward a final agreement?

KG: With the drumbeat for war with Iran ramping up in late 2006, FCNL sprang into action. Then-Executive Secretary Joe Volk traveled to Iran in February 2007 as part of a delegation of religious leaders who wanted to defuse US-Iranian tensions.

Since that time, we've strengthened our grassroots advocates across the country to publish pro-diplomacy op-eds, speak effectively with their members of Congress and build sustained relationships with them. FCNL staff and our network have made hundreds of lobby visits to congressional offices, including bringing faith leaders and national security validators, to help block saber-rattling legislation. This includes working closely with the former chief of staff to Secretary of State Colin Powell to ensure that members of Congress and media influencers hear the national security arguments for a nuclear deal with Iran.

I've also had the honor to co-author op-eds with Rep. Raúl Grijalva and Rep. Charles Rangel urging Congress to support, not sabotage, the best chance in years to guard against a nuclear-armed Iran and the risk of another war.

Since the September phone call between President Obama and President Rouhani, FCNL's network has published over 130 pro-diplomacy letters to the editor in almost every state in the country.  We're glad that they have helped serve as a tool to demonstrate pro-diplomacy constituent support in our meetings and those of our colleagues.

PF: What are some of the activities FCNL is engaged in to support diplomacy with Iran going forward?

KG: Regardless of what happens on July 20th, we know diplomacy is a marathon, not a sprint, and that we will also have our work cut out for us after the elections. That is why we are preparing now to bring more than 250 citizen advocates for our national lobby day at our annual meeting in November. As part of the Quaker Public Policy Institute and Lobby Day, these advocates will reach out to policymakers to ask that they publicly support diplomacy with Iran. We intend to make this the largest pro-diplomacy lobby day in Washington this year.

In the meantime, we are bringing influential voices to support diplomacy on the Hill. This week, that will be Ambassador Bill Miller, who helped negotiate the release of the three American hikers held hostage in Iran, and Joshua Fattal, one of those hikers imprisoned in Iran. They will be meeting with several senators and members of Congress to share their powerful, first-hand accounts of how a diplomatic breakthrough between the United States and Iran can be achieved and must be pursued.

We've tracked about 190 members of Congress who have gone on the record in support of diplomacy with Iran since President Rouhani was elected. We are working to raise that number by working with members of Congress to prepare statements, op-eds and other resources to help build a pro-diplomacy drumbeat that gives our diplomats the negotiating space to be successful.

Kate Gould is the Friends Committee on National Legislation's lead lobbyist on Middle East policy.  Kate has advocated on Middle East policy issues for more than six years and is one of only a handful of registered lobbyists in Washington, D.C. working to prevent war with Iran and support peace in Syria and Israel/Palestine. She represents FCNL on the board of Churches for Middle East Peace.

A Window of Opportunity — Nuclear Negotiations between Iran and World Powers

Broken budgets? Make a withdrawal from the Nuclear ATM