Experimenting with 'the bomb'

If you’ve ever wondered who is really in command and who is in control, Smriti Keshari and Eric Schlosser have some answers for you. Keshari, the critically acclaimed New York-based artist and filmmaker collaborated with author Eric Schlosser on the Tribeca (and Netflix) sleeper hit film, ‘the bomb.’

the bomb has a new iteration of the project showing at Pioneer Works in New York City through May 23, 2021. Working with accomplished Installation Designer Ben Kreukniet, the piece is designed as a freestanding structure consisting of 9 columns and 45 screens projecting the 60-minute film, the exhibition directly places the viewer into a “visceral, non-linear, and seemingly inescapable” experience.

"the bomb is a multi-channel video installation conveying the contained chaos of nuclear weapons,” said Kreukniet. “This installation design is inspired by the nuclear silos and infrastructure that has been constructed to keep this ‘invisible’ force of nuclear weapons hidden, protected, and ready to use at a moment’s notice.”

The installation comprises 45 screens in a circular array, confronting the viewer with a multi-screen edit of the film in a format suggestive of a nuclear control room or CCTV surveillance room.  In (re)presenting the film in this way, Kreukniet says the work aims to present multiple points of view of this quiet threat during a time when countries are openly expanding rather than reducing their nuclear arsenals.

“The installation,” continued Kreukniet,  “urges the viewer to confront the threat of nuclear weapons, often seen as one of the past, as one very much of the present. At the time of writing this, the doomsday clock sits at 100 seconds to midnight."

Ploughshares Fund, a supporting partner on the film version of "the bomb," spoke with Keshari on this latest iteration of their unique collaboration with a creative team of filmmakers, musicians, and designers.

For those who will be hearing or reading about the film and exhibition for the first time can you give a little context of how this project and journey began, and why it was important for you to explore this subject of ‘the bomb?’

I had been thinking about putting people inside of a film and challenging the one-way-one-directional experience of viewing – whether it's a film, theater performance or live music show single-projected at you.

What would it be like if you were in the center of a story? How would your perception of the subject be different if the experience in itself was different? Around this time, I was reading Eric Schlosser’s Command and Control. And the book left quite a profound impact on me, it became really evident that my generation is living under this most awful nuclear cloud, and with a four-minute warning the world itself could likely end.

The book was very gripping and it made me feel quite sad and quite angry.

the bomb is dripping with anger, fear and sadness – inspiration that many artists, tend to deny. Yet, you seem to embrace it. Is that accurate?

Yes. Sad, because I couldn't believe this reality we live in a world with over 13,000 nuclear weapons possessed by nine countries. And angry, because I didn't know anything about it. I mean I knew the headlines, of course, but it didn't have the same emotional and cultural impact on me as it did for people during the Cold War or Cuban missile crisis.

It made me want to do something that allowed people to have a deeper, more visceral and emotional understanding. And so with an incredible group of collaborators, Eric and I began the process.  ‘the bomb’ is a 60-minute film meant to deliberately ignite the deeper visceral and emotional understanding of the nuclear reality that we're living in right now.

Photo of multimedia presentation of 'the bomb.'

Are you able to balance things out by offering the viewer/participant any hope?

We still have a choice. That's one of the most important things that I remember knowing and feeling when I went to the International Campaign to Abolish Nuclear Weapons (ICAN) humanitarian conference. Hearing through the speakers the incredible voices that were up there, you realize… this is an existential threat that we can do something about. We just need to engage people – whether it's through politics, art, culture.

Central in the making of the bomb, and as documented in Eric Schlosser’s book, is emphasizing what people don’t want to think about: that these weapons are machines. And like microwaves, they can and eventually will fail.

Nuclear weapons are completely out of sight out and out of mind. They are hidden underground and yet the nuclear threat still persists. While we were editing the film in Los Angeles with the co-director and editor Kevin Ford, I would pass by the Hollywood sign, and I would think what if instead of that Hollywood sign, there was a nuclear weapon there? And instead of every single weapon being underground, what if it was above? We would have more of a collective consciousness about it. And the truth is, the less we know about them unless we talk about them, the more dangerous they become. After long days of edits, the artistic director, Stanley Donwood and I, would often question people, how many nuclear weapons do you think we have? And oftentimes, people would give us puzzled answers such as “11? “121?” Or “Didn’t we get rid of them?”

It's so easy to not think about them because there's a sense that someone over there is taking care of it, and so ‘the bomb’ in so many ways, really forces you to confront that reality. 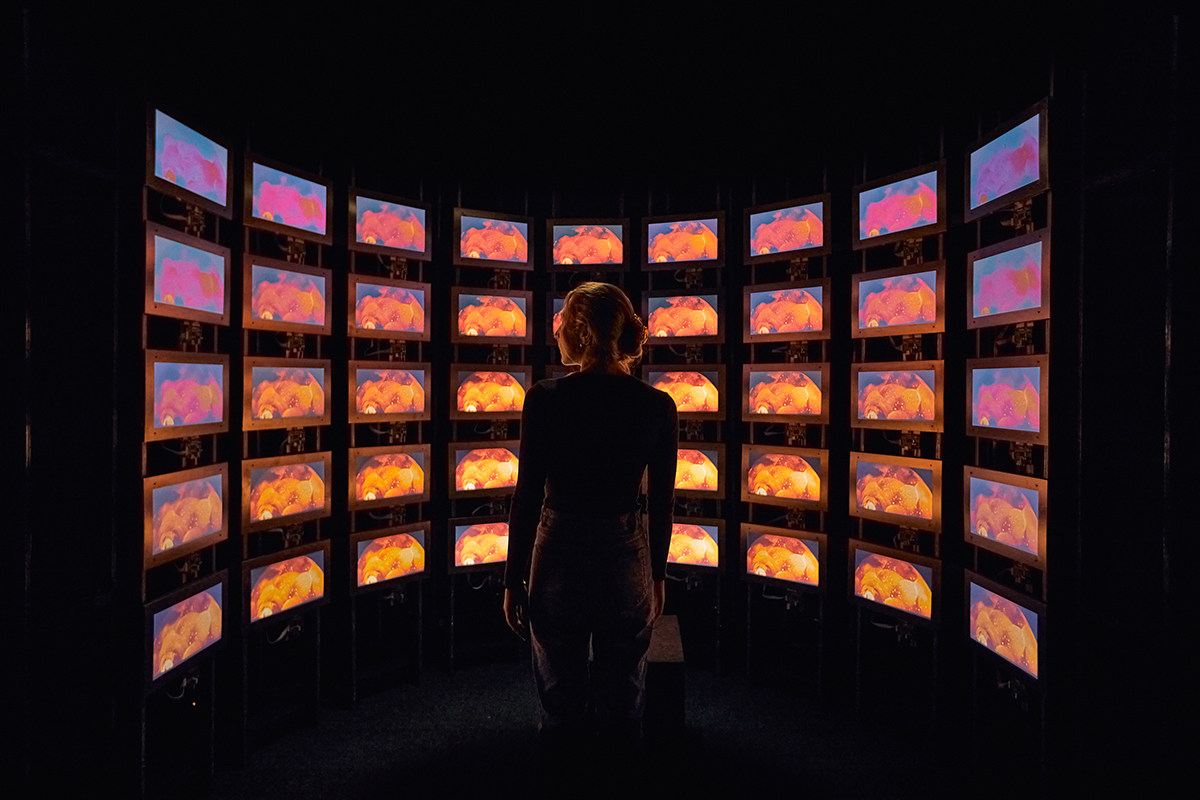 The Pioneer Works exhibition of the bomb sounds like the very definition of show-not-tell. Can you talk about your intentions of making it an all-encompassing experience?

We were really inspired by command and control centers. At the heart of it was this question about technology. With the installation designer, Ben Kreukniet, we talked about machines and the perverse appeal of them, the beauty of them and the seduction of machines.

Some of the original photos that we were looking at for inspiration were a lot of old command and control centers of people just watching multiple screens.

Now we are so used to having multiple screens everywhere all around us, all the time, whether it's at the airport or on the streets. The idea of a single image commanding your attention has faded away. It's almost like we need to be distracted to concentrate.

Grabbing people's senses and having the bomb and its 45 screens, nine by five, so nine rows and five screens all around – it's really quite intense. You can really see the transformation in people's faces. 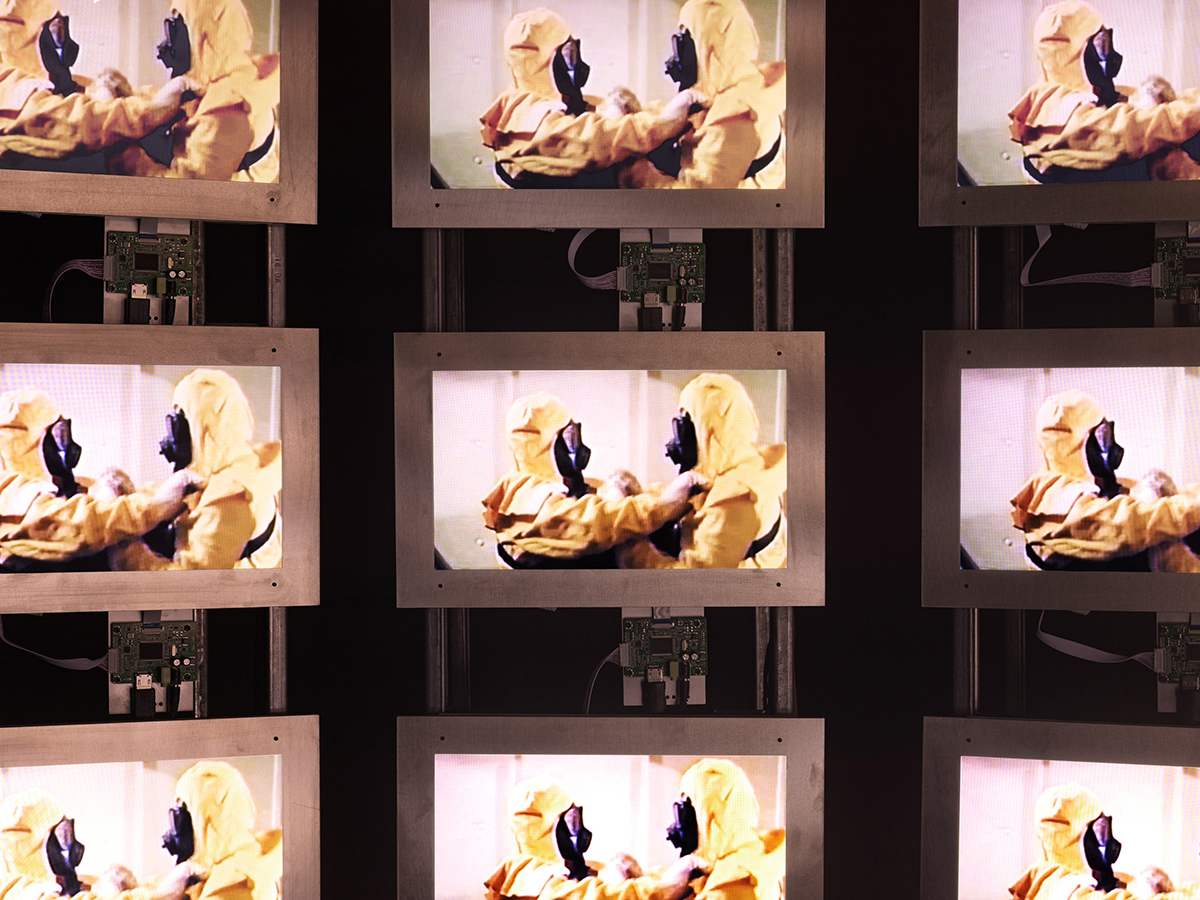 Closeup of 'the bomb' installation at Pioneer Works in New York City. Photo by Dan Bradica.

The soundtrack to this film and exhibition, is literally an “Acid” trip. Can you talk about the contributions of the band, The Acid?

When making the film we talked about structuring the journey like a DJ set with The Acid's Adam Freeland, Ry X, Steve Nalepa and Jens Kuross. A good DJ set takes you through this emotional through line.

We wanted to overwhelm people with information and as much visual and written poetry because different things will speak to people differently. The Acid is really great at build and release of tension. And there's those feelings of drones of this existential threat that you feel through the music.

Photo of The Acid, composers of 'the bomb' soundtrack.

Ploughshares Fund is a proud supporting partner of yours. How was your experience working with our foundation?

I am a big fan of Ploughshares. I actually had the entire collaborative team read Ploughshares Fund’s reports. There are different pathways that can connect people whether it's looking at the trillion-dollar spending, no first use, or even talking about the UK’s current efforts to modernize nuclear weapons – there's a lot of ways that people can learn more. Ploughshares is this incredible organization that is reinforcing why we need to be talking about this right now. There’s obviously so many problems in the world that are quite existential, but this is one that we have a choice, you know. And in some ways, there is also a moral revolution around this.

the bomb is currently showing at Pioneer Works, NYC, until May 23rd, 2021 - tickets here.