The United States has more than 1,500 nuclear warheads deployed on a “triad” of submarines, bombers, and landbased missiles. These doomsday weapons were built during the Cold War to fight an enemy that no longer exists.

The Cold War and the USSR are gone, but the weapons remain. And the submarines, bombers, and missiles are aging. They must be retired or replaced. President Barack Obama has approved plans to rebuild and maintain them all, with a price tag of about $1 trillion over the next 30 years.

A complete rebuild of the US nuclear arsenal is neither justified by the external threat nor supported by the federal budget. Russia may be causing trouble in Eastern Europe, but it has nothing to gain from nuclear war with the United States. Meanwhile, the limited US defense budget would be much better spent addressing higher priority threats, such as terrorism, cyber attacks and global warming.

Moreover, pursuing an excessive arsenal runs the risk of igniting a new arms race with Russia that could needlessly undermine US security. “We are about to begin a new round in the nuclear arms race unless some brake is put on it right now,” former Secretary of Defense William J. Perry recently warned. Indeed, a new arms race has already begun in slow motion. Multiyear contracts are being signed, such as the recent one with Northrop Grumman for a new strategic bomber, and billions of dollars are being spent. Before long, the programs will become too big to stop.

The curtain is closing on the Obama administration, and it will be up to the next president to bring US plans for its nuclear arsenal back to reality. There are many ways to scale back the current bloated programs, saving hundreds of billions of dollars while still maintaining a strong US nuclear deterrent for as long as needed. 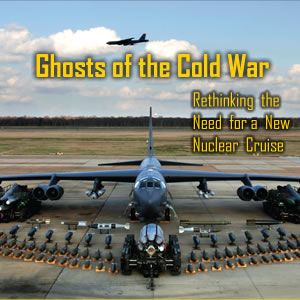 Seven years ago, in April 2009, President Obama gave a speech in Prague, in the Czech Republic, where he called for “the peace and security of a world without nuclear weapons.” The next president can continue that quest by canceling the new nuclear cruise missile as a first step toward a global ban on these destabilizing weapons.