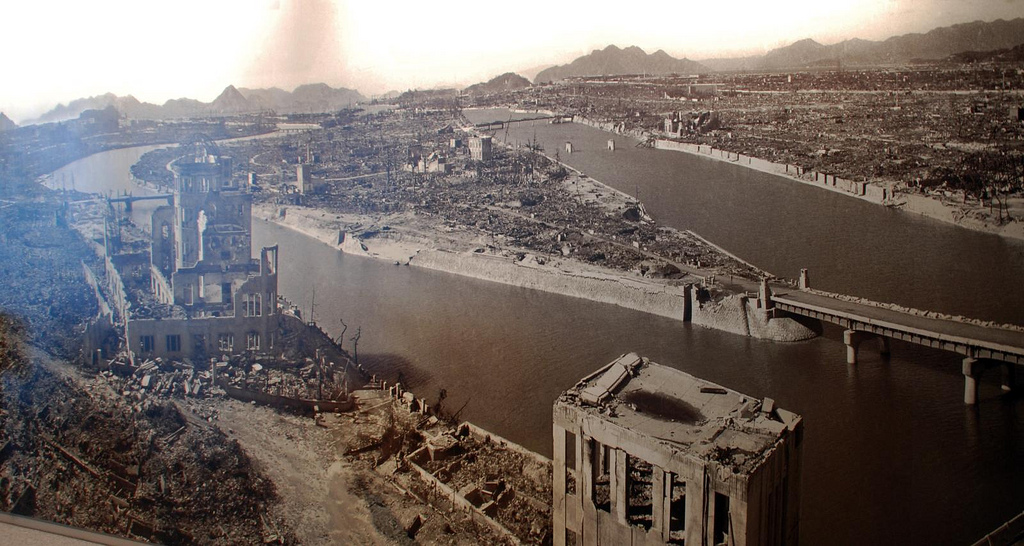 69 years ago the world fundamentally changed. With a single bomb, an atom bomb, the entire city of Hiroshima was wiped out and and more than 100,000 people were killed. Nagasaki was similarly bombed three days later and again, a single bomb killed 50,000 people.

A new era had begun, one in which all humanity was just minutes from destruction.

The ensuing decades were defined by a Cold War arms race which produced tens of thousands of these devastating weapons. Living under the shadow of nuclear Armageddon has made a profound impact on the world. These weapons have cost taxpayers trillions of dollars, damaged human health, contaminated the environment and spread fear across the globe. More than once the world teetered on the verge of World War III, this time armed with nuclear weapons.

Over the next five days we will be commemorating the anniversary of the Hiroshima and Nagasaki bombings using Twitter (follow us here) to curate a series of tweets and information highlighting the risks, threats to health, the financial costs and arms control successes associated with nuclear weapons. The themes each day are:

We encourage you to use the comments section below to share your thoughts and experiences living under the threat nuclear weapons (think “duck and cover” drills at school), the cost to taxpayers or even your recollections of the Hiroshima and Nagasaki bombings. Why do you oppose nuclear weapons? And what do you think we must do to create a world where we will never again feel threatened by their devastating force?

For more... see a first hand account of Hiroshima's aftermath from one of our supporters, Reid Dennis.

The US War Department's Archival Footage of the Bombing of Hiroshima