Guyette and Colleen Moore work at Beyond the Bomb, a grassroots campaign aimed at stopping nuclear war. “We work to uplift the voices of people who have been impacted by our nuclear weapons system,” Guyette explained. “Whether that’s through the fact that was spend too much money on nuclear weapons that we can’t afford healthcare or education for our citizens.”

The nuclear threat is “Issue Zero,“ they say. “Because if nuclear war breaks out tomorrow, all of our work on other social issues ends,” Guyette said. “We can’t work on equality, we can’t work on advancing civil rights, we can’t work on ending racism if all we can focus on is the fact that the world is ending around us.”

Guyette and Moore rely on volunteers and fellows — collectively termed the “Bomb Squad” — to build grassroots support for nuclear policy reform. “Our goal is to pass a No First Use bill,” said Guyette. “So, to do that we focus on writing letters to representatives, writing letters to the editor - really increasing engagement through building awareness of this issue.”

“So many people aren’t even aware that nothing stands in the president’s way of launching a nuclear weapon,” Guyette said. “And the first step towards getting anyone to take action on that is to make them aware of the problem.” 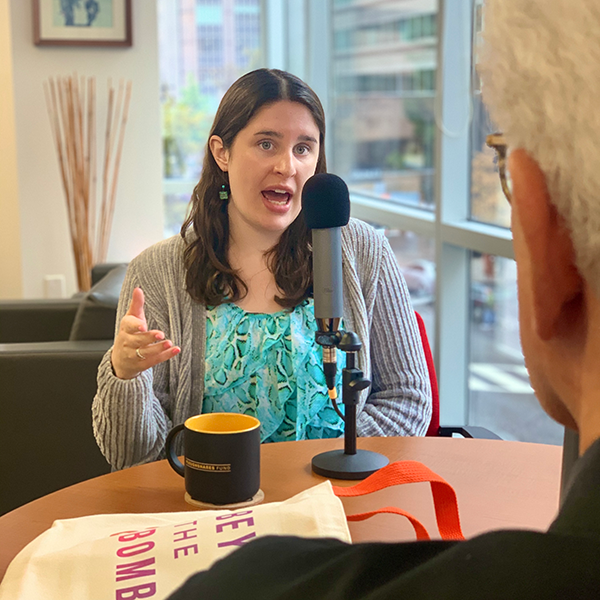 Colleen Moore from Beyond the Bomb

Part of that, as Moore explained, is making nuclear weapons personal. “Sometimes in this field — I mean we’re working on an issue like nuclear weapons - it forces people to shut down. They’re just seeing that things are so bad that they say, ‘I don’t have any agency in doing something about this.’ So, we give them specific things to do.”

Both Guyette and Moore are optimistic about stopping a new arms race. “There is so much hope in the 2020 election,” Guyette said. “We’ve got that education and awareness building. And then we have a solution so fresh on the horizon.”

But, Moore cautioned, that didn’t mean they were relaxing anytime soon. “There are so many things that could happen in the next year, year and a half. And we’re prepared for it all.”

Listen to the full interview with Tristan Guyette and Colleen Moore from Beyond the Bomb on this page or subscribe and download wherever you get your podcasts.

About Press the Button: in addition to "The Interview" in which Joe Cirincione sits down with prominent thinkers, legislators, activists, and grantees working on nuclear weapons issues for a short, illuminating conversation, episodes have two other segments: "Early Warning" — a round-up of the most pressing nuclear news in 7 minutes, roughly the same amount of time the US president has to authorize a nuclear weapons launch in the event of an incoming attack on the United States; and "In the Silo" — a monthly, close-up look at key nuclear issues and events around the world, utilizing field recordings, media clips, interviews, and extensive narration.

Zack Brown
November 11, 2019
Posted in: Grassroots, No First Use, Press the Button, The New Arms Race

How President Biden Can Reduce Nuclear Dangers Without Congress

A WORLD FREE OF NUCLEAR WEAPONS IS IN OUR HANDS