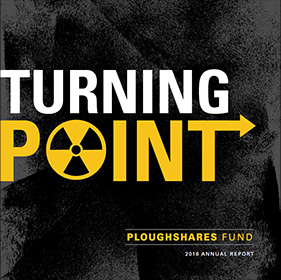 In a year defined by uncertainty for us all as a nation, Ploughshares Fund and its vast network of grantees never wavered from our core purpose. Despite one of the most volatile political landscapes in memory, we remained laser focused on our mission: making the world safe from nuclear weapons threats. We will redouble our efforts and strengthen our resolve to defend our collective right to a safe and secure future as the Trump administration comes into power.

Introduction to the Annual Report by Mary Estrin, Board Chair, Ploughshares Fund

Challenge is nothing new to Ploughshares Fund. Along with our grantees, we began 2016 poised to defend the Iran nuclear deal from politicized attacks by its critics when North Korea sent shockwaves around the world with its fourth nuclear test. We remained nimble, working swiftly to educate the public and policymakers on the growing threat posed by North Korea’s nuclear program, and enhancing investments in expertise on this issue. And importantly, we seized upon new opportunities to put pressure on the Obama Administration to make critical nuclear policy changes before he leaves office.

If I had to choose one word to describe where Ploughshares Fund stands at this critical juncture in time, it would be ready. Just as our network was ready to provide the Iran deal with the important civil society support it needed to succeed, this election season we came prepared to help set the course for a saner nuclear policy that will reverberate through future generations for decades to come. When President-elect Donald Trump enters office, he’ll be met with Ploughshares Fund’s new report, 10 Big Nuclear Ideas for the Next President, published one week after the election. It features a range of leading national security experts, such as former Secretary of Defense William J. Perry and former CIA nuclear weapons expert Valerie Plame, whose wisdom on nuclear threats – and how to best reduce them – can equip the incoming administration with the knowledge it needs to shape the best policies.

Ploughshares Fund knows that the investments we make today will help determine whether we remain stuck in Cold War era thinking or advance towards a safer tomorrow. Thanks to the steady commitment of our supporters, we will continue to do everything in our power to make sure the incoming administration, Congress and our country move forward on the right path. We are ready to make a difference – no matter who is in the Oval Office.