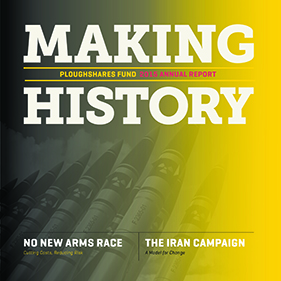 Ploughshares Fund and its grantees continue to work at the forefront of some of the most critical global security issues of our day. Check out our annual report to learn more about what we accomplished in 2015, from helping secure the Iran nuclear agreement, to raising the alarm over a new arms race between the US and Russia. Meet the people and read the stories behind these important campaigns aimed at building a world where nuclear weapons can never be used again. Together, we are making history.

Introduction to the Annual Report by Mary Estrin, Board Chair, Ploughshares Fund:
We’re making history. Those are the first words that came to mind in September when I learned that the Iran nuclear agreement survived a tough congressional review. It is especially symbolic that this heroic feat of diplomacy and victory for global security came into being exactly 70 years after the Trinity Test, the world’s first atomic explosion in the deserts of New Mexico, not far from where I live today.
This landmark agreement that makes us all safer by blocking every one of Iran’s pathways to building a bomb, was driven by the fearless leadership of the Obama Administration and supporters in Congress like House Minority Leader Nancy Pelosi. Importantly, the birth of the agreement was a truly collaborative effort, carefully negotiated alongside five other world powers, including our top European allies. Less known is the absolutely critical role that civil society played in tipping the scales towards this extraordinary policy victory.
Thanks to you, our supporters, Ploughshares Fund has been the ‘hub’—as the New York Times wrote—of this civil society campaign promoting a diplomatic solution to the Iranian nuclear weapons threat. Over the course of the past five years, Ploughshares Fund wired a highly effective network, financing and coordinating the  fforts of scores of diverse organizations and individuals, amplifying their collective voice above the din of a formidable opposition. As Chair of the Board, I have had a front row seat to the extraordinary generosity of our supporters that made it all possible.
In the shadow of this unprecedented nonproliferation victory, supporters like you also ensured that essential research, advocacy and innovation in other areas continued. Much vital work remains to reduce the threats posed by the nearly 16,000 nuclear weapons still on the planet, as the United States, Russia, and the seven other nuclear states stand poised on the precipice of a costly and dangerous new arms race to modernize this global stockpile.
Thank you for helping the seemingly impossible become possible. Now it’s time to keep the momentum strong, to make sure the Iran agreement is implemented, and to redouble our commitment to building a world where nuclear weapons can never be used again. That is the only way to ensure that the human devastation unleashed in Hiroshima and Nagasaki, just three weeks after the Trinity Test, is never repeated. Together, we can continue making nuclear weapons history.
- MARY LLOYD ESTRIN
BOARD CHAIR, PLOUGHSHARES FUND