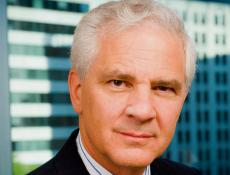 Joseph Cirincione is president of Ploughshares Fund, a global security foundation. He is also the host of Press The Button, a weekly podcast from Ploughshares Fund dedicated to nuclear policy and national security. A new episode is available every Tuesday.

Cirincione is the author of the books Nuclear Nightmares: Securing the World Before It Is Too Late, Bomb Scare: The History and Future of Nuclear Weapons and Deadly Arsenals: Nuclear, Biological and Chemical Threats. He has worked on nuclear weapons policy in Washington for over 35 years and is considered one of the top experts in the field. He served previously as vice president for national security at the Center for American Progress, director for non-proliferation at Carnegie Endowment, and senior associate at Stimson. He worked for nine years as professional staff on the U.S. House of Representatives Committees on Armed Services and Government Operations. He is a member of the Council on Foreign Relations and a former member of the International Security Advisory Board for Secretaries of State John Kerry and Hillary Clinton. He also teaches at the Georgetown University Graduate School of Foreign Service.

The Next Phase of U.S. Strategy on Iran

In an annual Washington rite on Thursday, the head of the U.S. intelligence community will publicly brief the Senate on the major threats facing the nation.

How We Dodged Libya's Nuclear Bullet

In a stunning trans-Atlantic announcement on December 19, 2003, British Prime Minister Tony Blair and President Bush said Libya had agreed, after nine months of secret talks, to publicly disclose and dismantle all nuclear,

As a free Egypt transforms itself, analysts are nervously watching for signs of new nuclear ambitions. Concern revolves around three issues:

One of Ronald Reagan's most powerful and living legacies was his dream of a world free of nuclear weapons. It is worth remembering this sixth of February, the centennial of his birth.

U.S. Strategy on Iran is Working

The strategic calculus for dealing with Iran's nuclear program has shifted dramatically in the past month.

The New START treaty has obvious benefits for national security. But the overwhelming vote in favor of the treaty (71-26) has much broader significance. And the still sizable vote against it, a troubling dark side.

Showdown in the Senate

When the President, the Secretary of Defense and the Joint Chiefs of Staff are united, they usually get what they want. And they really want the New START treaty.

America’s national security elites have come out in force in support of New START. Just this morning, five former Republican secretaries of state urged the Senate to ratify the treaty in an op-ed for The Washington Post. They wrote, “we have here an agreement that is clearly in our national interest.”

A Washington showdown looms on the critical New Start treaty this year. Confronted with GOP calls for delay, more than three-dozen former senior military and national security leaders are weighing in with their strong support for approving the treaty this year.

Why North Korea Attack is Not a Crisis

By Paul Carroll and Joe Cirincione

Headlines and pundits once again declare that we have a crisis on our hands in the wake of discovering that North Korea is building a new nuclear reactor and a uranium enrichment plant.

When Is the Far Right Going to Start Listening to the Military?

The New START treaty has the unanimous support of America's military leaders. But you wouldn't know it from the wails of far-right pundits.