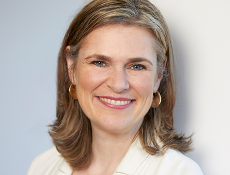 Emma is president of Ploughshares Fund.

Emma served as a Stanton Nuclear Security Fellow at the Council on Foreign Relations. She also served as an advisor in Australia’s Department of the Prime Minister and Cabinet on national security and international affairs and as a public affairs officer at the Australian embassy in Washington, DC.

She has a background in international security (Fletcher School of Law and Diplomacy, Tufts University, PhD and MALD; University of Melbourne, BA [Hons]). While completing her PhD, she was a fellow in the International Security Program and Project on Managing the Atom at Harvard University’s Belfer Center for Science and International Affairs.

In the Spring of 2019, Emma delivered a TED Talk on the importance of confronting, humanizing and ultimately solving the existential threat of nuclear weapons. Between 2014 and June 2020, Emma served on the advisory committee of N Square—a multi-funder initiative to promote innovation in the nuclear realm. She was a 2014-2016 Emerging Leader at the Chicago Council on Global Affairs.